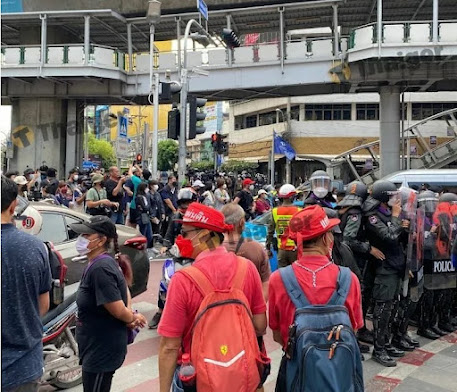 Riot police clashed with protestors at Asoke Intersection in Bangkok this afternoon as world leaders gather in the Thai capital for the APEC Summit 2022.

Due to road closures, the intersection is the closest the public can get to the summit which is being held at the Queen Sirikit National Convention Centre from November 16-19.

Police ramped up security in the city in preparation for the meeting and riot police were deployed in anticipation of protests.

The demonstration held in Asoke outside the entrance of Sukhumvit MRT Station today was entitled, “What’s Happening In Thailand?”

“Release all political prisoners in Thailand”

The protest was largely peaceful until the police allegedly confiscated signs and other equipment from demonstrators, which is when some scuffles broke out between protestors and riot police.

A demonstrator told the Thaiger that, “earlier in the day, some protestors were arrested.”

Why are different protest groups coming together and raising all these issues at once?
Demonstrators see the APEC Summit 2022 as the perfect time to raise Thailand’s issues on the global stage.

Not only that, but demonstrators feel safe to come out and protest during the summit, knowing that police wouldn’t dare use brutality or water cannons against protestors – as they did during the pro-democracy protests of 2020 – with world leaders like French President Emmanuel Macron, Chinese President Xi Jinping and Vice President of the US Kamala Harris just a stone’s throw away.

“The government said they will allow foreigners to buy land in Thailand for 40 million baht… If land costs 40 million baht, how will Thai people buy it? How will farmers afford it?”

Posted by Gerrit Tienkamp at 10:09 AM